Fifty-seven years ago today Yigael Yadin announced the discovery of letters written by Bar Kochba, the leader of the third Judaean rebellion against Rome (from 132-134 C.E.). These letters reveal that his real name was Shimon Bar Koseba. Tradition holds that the name Bar Kokhba was given to him by Rabbi Akiva, who believed that the rebel leader might be the Messiah. Bar Kochba means “son of a star” and alludes to a portion of Numbers 24:17as a Messianic prophecy: “There shall come a star out of Jacob, and a scepter shall rise out of Israel.”

Though Bar Kokhba’s revolt was short-lived, it took the Romans by surprise and had some early success. For two and a half years the Judaeans even declared their victory and independence from Rome. During this time Bar Kokhba declared himself the “Prince of Israel” (Nasi Yisrael), and coins were minted with his name (“Shimon”), representing the Jewish temple (which had been destroyed by the Romans 60 years earlier), and stating “for the freedom of Jerusalem.” 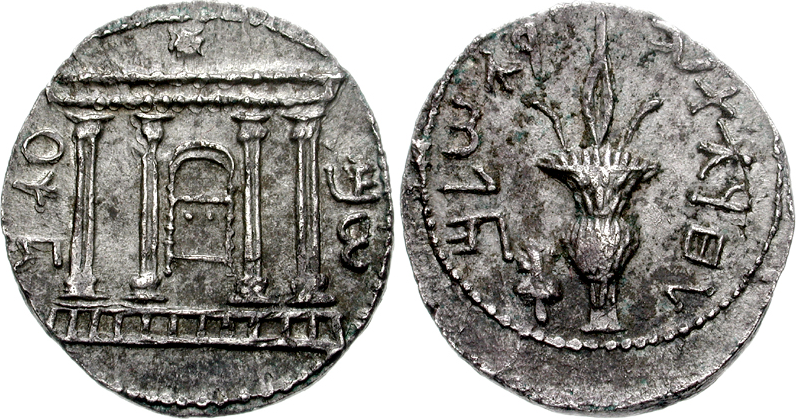 Coins minted during the brief period of Bar Kokhba’s success in rebelling against Rome.

However, it should be noted that, though given honor by Rabbi Akiva and his victories (for a while) against the Romans, Bar Kokhba was not popular with everyone. He was known to be cruel and cold-blooded, reportedly killing his own uncle and forcing young men into his rebellion with threats of violence. According to one account, when young men were in his army, he demanded that they show their loyalty by chopping off one of their own fingers, despite the protests of the people and their leaders.

In Christian histories Bar Kokhba also is said to have tortured and killed followers of Jesus:

“For in the late Jewish war Barcocheba, the leader of the Jewish rebellion, commanded that Christians alone should be visited with terrible punishments unless they would deny and blaspheme Jesus Christ.” (Justin Martyr, quoted by Eusebius)

“In this tempestuous time also, Cochebas leader of the Jewish faction put Christians to death with various tortures.”

For these reasons and for his messianic claims, it is not surprising that Bar Kokhba is negatively depicted by Christians. Eusebius writes:

The leader of the Jews at this time was a man by the name of Barcocheba (which signifies a star), who possessed the character of a robber and a murderer, but nevertheless, relying upon his name, boasted to them, as if they were slaves, that he possessed wonderful powers; and he pretended that he was a star that had come down to them out of heaven to bring them light in the midst of their misfortunes.

Failure, Destruction, and a Third Name

Ultimately, Bar Kokhba’s rebellion ended in failure. The Romans crushed the revolt and killed extremely large numbers of Judaeans.  Many rabbis and leaders were killed and put through horrible torture. Akiva, who had given Bar Kokhba his messianic title, was flayed alive with metal combs. Another Rabbi was burned at the stake wrapped in a Torah scroll. Though Cassius Dio’s, writing in the third century, claim that there were 580,000 Jewish deaths is likely exaggerated, it captures the scope and utter defeat of Bar Kokhba’s movement and the loss experienced by the Judaeans—even those who had not rebelled. Jerusalem was renamed “Aelia Capitolina” by the Roman Emperor Hadrian, and he forbade any Jews from entering the city. Where the Temple had stood (prior to its destruction a generation earlier in the first revolt) Hadrian erected a statue of himself and a statue of the god Jupiter.  Hadrian also renamed the region renamed the region Syria Palestina.

Due to the aftermath of Judea’s great and devastating loss, Bar Kokhba is not favorably depicted in Jewish writings and tradition. Rather than being proclaimed a messiah, he is seen as a false messiah and deceiver.  Rabbi Akiva’s own disciple, instead of calling him Bar Kochba, made a play on his original name (Bar Koseba) and called him Bar Koziba,  “the son of the lie.” This is the name by which he is known in subsequent Rabbinic literature and tradition. In addition, the impact of Bar Kochba/Koziba left a deeply skeptical and negative mark on Jewish messianic elements and expectations ever since, both in terms of claims and acceptance of such claims.

For more on the discovery, you can read this article from HaAretz on the 55th Anniversary of the announcement of the finds. This post was inspired by Jim Davila at PaleoJudaica.blogspot.com who has a series of posts providing great links for more information about Bar Kokhba and his letters beginning here (be sure to follow all the links).