One thing that I have appreciated since getting back from my trip to Israel is a deeper understanding of the locations and journeys in the scripture.  This week I have been thinking both about Jesus’ last week in Jerusalem (celebrated next week by Christians as Holy Week) and also about his last journey from Galilee to Judea (which likely would have started a week or less earlier).

Each of the Gospels has a different version of this journey.  In the synoptics, (the three Gospels that give similar views of Jesus’ life), Matthew and Mark each quickly summarize this journey (including time spent “beyond the Jordan”) in two chapters (Mark 9-10 and Matthew 19-20). Luke, however, adds material unique to his gospel (including the story of the “Prodigal Son”) and lengthens the journey narrative to 10 chapters (Luke 9:51-19:28). Generally, the pattern in the synoptics is 1) removal to the other side of the Jordan, 2) journey down the Jordan Valley to Jericho, 3) up to Bethpage and Bethany on the east side of the Mount of Olives, and 4) arrival in Jerusalem.  One person, walking quickly, could cover this trip in a few of days. Traveling with a group, such a journey could take up to a week or more. 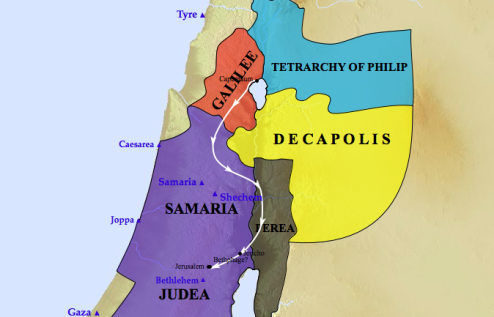 Traditional route of Jesus’ last journey to Jerusalem, based upon the synoptics.

In the Gospel of John, there is no real journey, as the narrative jumps from an account of the Feast of Dedication (Hanukkah) in Jerusalem, a withdrawal to the other side of the Jordan, the healing of Lazarus in Bethany, followed by a stay to a place called Ephraim, and then to Passover in Jerusalem.  There is no mention of a return to Galilee, so there is no journey narrative but simply:

“He went away again across the Jordan to the place where John had been baptizing at first, and there he remained. And many came to him. And they said, “John did no sign, but everything that John said about this man was true.” And many believed in him there.

Now a certain man was ill, Lazarus of Bethany, the village of Mary and her sister Martha…”

Jesus stays a couple of days longer where he was, outside of Judea and (presumably) across the Jordan, and then he returns to Bethany. Afterwards

“Jesus therefore no longer walked openly among the Jews, but went from there to the region near the wilderness, to a town called Ephraim, and there he stayed with the disciples.”

This location of Ephraim is uncertain.  It is possibly the modern town of Taib or Et Taiyibeh, northeast of Jerusalem.

Despite the differences the commonalities in the four narratives are 1) across the Jordan and outside Judea, 2) a visit to Bethany, and 3) arrrival at Jerusalem.  By implication, given the route of these locations, this would have included journeying by Jericho and over the Mount of Olives.

Having been to these areas, this is some of what that journey may have looked like, leaving Capernaum in Galilee, to the north of the Lake:

The sea of Galilee from the north, just west of Capernaum on the traditional Mount of the Beatitudes. Tiberias, Ginosaur, and Migdal can be seen.

Traveling south and east into the area beyond the Jordan: 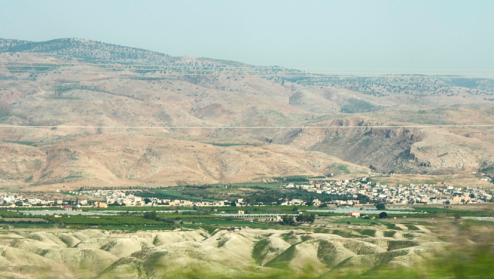 The mountains of Jordan, to the south-east of Galilee.

To the west are the fertile hills bordering Galilee and Samaria:

As the journey goes south and come back towards Jericho, we enter into the Judean wilderness, where Jesus was also tempted (what emotions and temptations was he facing on this last journey!?):

Beginning of the Judean wilderness

The area is desert and marked by cliffs and hills dotted with hundreds (thousands) of caves:

Caves in the Judean wilderness.

And we begin to make the climb up towards Bethany, the Mount of Olives, and Jerusalem. 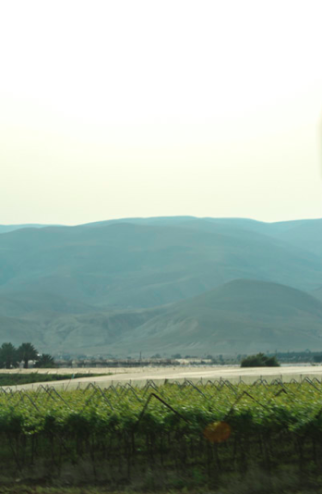 Judean hills towards Jerusalem from the Jordan Valley.

The ascent towards Jerusalem, past Jericho.

Finally, after spending time in Bethany, the journey takes the travelers over the the Mount of Olives, and the view to the west, looking down across the Kidron Valley (the Valley of Jehoshaphat), is Jerusalem and the Temple Mount:

Overlooking Jerusalem from the Mount of Olives.