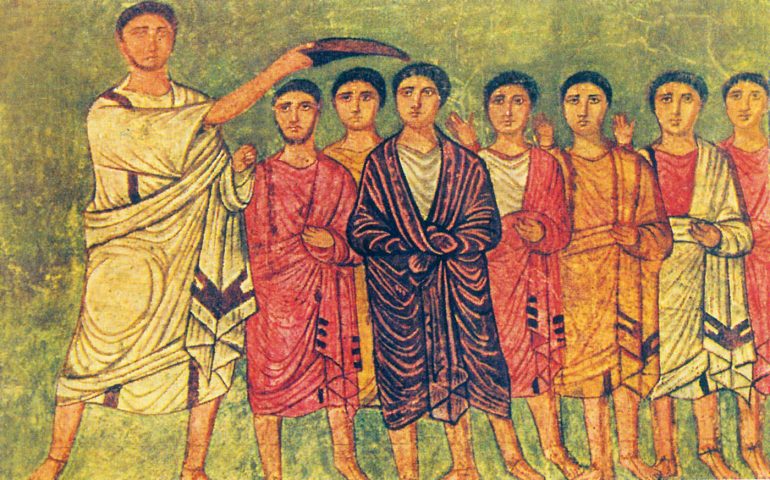 Joan Taylor has written a really good post over at ASOR’s Ancient Near East Today website discussing the issue what Jesus may have looked like. She first discusses the issue that most of our contemporary and iconic images of Jesus date from the Byzantine period or later, beginning some 300 years after Jesus and reflecting more the images and ideals of periods and cultures different from that of Jesus:

It is worth emphasizing that images of Jesus over time give us clues on how Jesus was imagined in different environments, but say absolutely nothing about what he really looked like. Our images of Jesus were largely created in the Byzantine era (4th-6th centuries). Byzantine images of Jesus were based on the image of a Graeco-Roman deity, for example the famous statue of Olympian Zeus by Phidias in the 4th century BCE.

She then develops a good case for using general images of men from Jewish and Near Eastern cultures which date closer to the first century, concluding:

If we are to imagine Jesus then, as a Jew of his time, the mummy paintings [from Greco-Roman Egypt] provide a good clue to his appearance. However, there is one other place to look: to the synagogue Dura Europos, dating from the early 3rd century. The depiction of Moses on the walls of the synagogue of Dura-Europos is probably the closest fit, I think, since it shows how a Jewish sage was imagined in the Graeco-Roman world. Moses is shown in undyed clothing, appropriate to tastes of ascetic masculinity (eschewing color), and his one mantle is a tallith, since one can see tassels (tzitzith). This image is a far more correct as a basis for imagining the historical Jesus than the adaptations of the Byzantine Jesus that have become standard.

Taylor highlights the image of Moses at the burning bush found at Dura Europos, but it should also be noted that the syngogue’s fresco had consistent depictions of men, including Moses at the burning bush, the crossing of the Red Sea, the anointing of David by Samuel, the worship of the golden calf, and others. All of these are men with short, apparently curly hair with beards (often missing the mustache). It also had depictions of women. Below are examples (all in the public domain and provided by wikicommons):

Main Post Image: Not Jesus, but David, among his brothers, being anointed by the prophet Samuel, from the paintings at the remains of the Dura Europas syngagogue in modern day Syria.