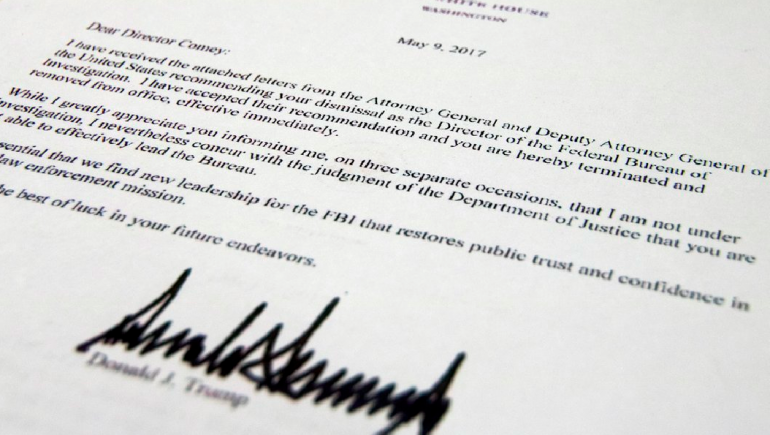 I haven’t made a political post about the President in a long time, but today’s actions (the firing FBI Director Comey by President Trump) are extremely troublesome.

I just want to remind everyone of a few things:

1) The investigation of persons connected to Donald Trump for working with the Russians began before Trump was elected, or even seemed like he had a chance of being elected. Eventually, this led to Paul Manafort’s resignation as Trump’s campaign manager due to investigations concerning and revealing information about his connections to Russia via his work in Ukraine with pro-Russian and Russian based organizations (from whom he may have illegally and off-the-books had received over $12 million) .

2) The notification to the FBI and CIA by a former British intelligence operative about possible Russian connections with and compromise of Trump happened at least 6 months prior to Trump becoming President and separate from the Manafort case.

3) During his entire campaign, Trump praised Vladmir Putin, jokingly welcomed hacking by Russia of American entities, and even quoted a report that had only appeared in a Russian news source.

4) Secretary of State Rex Tillerson was CEO of ExxonMobil when a $300 billon dollar deal with Russia fell apart due to sanctions imposed for their invasion of Ukraine. Former deputy defense secretary, John Hamre (an associate and advocate of Tillerson), has said that “[Rex Tillerson] has had more interactive time with Vladimir Putin than probably any other American with the exception of Henry Kissinger.”

5) Attorney General Jeff Sessions, when asked in his confirmation hearings if “there is any evidence that anyone affiliated with the Trump campaign communicated with the Russian government in the course of this campaign” responded by saying ” “I have been called a surrogate at a time or two in that campaign and I didn’t have — did not have communications with the Russians, and I’m unable to comment on it.” Then in March 2017 (after his confirmation) it was revealed that he had actually met with the Russian Ambassador at least twice during the campaign, one of those being during the height of the news of Russian hacking scandal in September 2016. This directly contradicted his testimony before Congress in answer to a direct question. Due to the investigation of the campaign and his involvement with it, Sessions said would recuse himself from anything associated with the investigation of potential Russian connections with the Trump Administration. Today, Comey was fired at the recommendation of Jeff Sessions.

6) National Security Advisor Michael Flynn had direct connections with Russia, including Vladmir Putin, had been paid by Russian media, and had illegal conversations with the Russian Ambassador prior to Trump taking office. Flynn denied such connections (and so did President Trump), but Flynn was eventually fired by Trump when the details about his communications with Russia (and potential of being compromised by them) and connections to Turkey were revealed.

7) The public conclusions of the FBI, the CIA, and the NSA, as testified before Congress, are that Russia actively worked during our Presidential elections not only against Hillary Clinton but in favor of Donald Trump. The testimony before Congress was made by FBI Director Comey and NSA Director Admiral Mike Rogers on Monday March 21.

These matters are verifiable. They are factual (not fake news). This is not a matter of faked-photoshop images or missing and/or hypothetical documents. This is very real. It is a reality, for example, that the National Security Advisor appointed by this Administration was fired for his deceit about connections to the Russian government and the potential of his being compromised by Russian intelligence. This was someone who had access to the highest levels of our government and security infrastructure and information.

There is enough evidence to warrant an investigation into Russian involvement in our system that it is already being conducted by the FBI in conjunction with CIA and NSA, and since the White House or Trump Campaign is potentially being investigated, such an investigation should be independent.  It should be troubling to all of us (no matter our political affiliation or philosophy) that as information is coming out about the investigations into these matters—two days before his scheduled testimony regarding national security issues—that the Director of the FBI was fired. If you are a Republican, look at the list above and think about how you would respond if this was a President from another party.

Please contact your members of Congress, voice your concerns, and ask them to authorize an independent investigation into these matters.