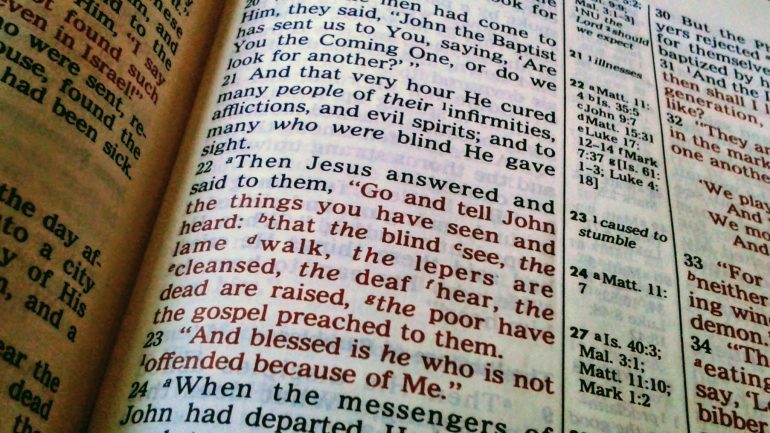 The disciples of John the Baptist came to him and said, “We were sent by John to ask you, ‘Are you the One? Or should we look for another?'”

And he made the man with the withered hand stand in front of them, and he said to them, “Is it lawful on the Sabbath to do good or to do harm, to save life or to kill?”

But the people were silent.

And knowing their thoughts, he said: “I understand your silence. Truly, truly this is a very complicated matter. It depends on things like: ‘What condition (or conditions) do they have?’, ‘how long they have had it and is it reoccurring?’, and, ‘Did they do something to cause this to themselves?’ Not to mention issues of whether they are even citizens of our people or not. What if they are, say, Syro-Phonecian or Roman? And, honestly, there’s the issue of ‘Can they afford it?’

“These are just facts of life: People get sick. People die.

“What’s really important to understand, in any case, is that it isn’t the role of kingdoms or governments to take care of these things. Truly, is it the role of kings and their representatives to go around healing the cripples? Giving sight to the blind? Or telling a bunch of poor sick people that their time for healing has come around? Do you know of any kingdom where these are the signs of a good and effective government? Such a government would require huge personal sacrifice by the healthy for the sake of the sick. The cost would be excruciatingly high.

“Truly, I’m telling you, such things are not the government’s cross to bear. Government is about law and order, fiscal responsibility, taking the tax and regulatory burdens off of businesses so we can really turn things around, and building a strong military to protect us from our enemies. These are the signs of a truly good government,  functioning the way government is supposed to function.”

Then he said to the man with the withered hand, “I’m sorry. It’s not my problem.”

Then, turning to his own disciples, he said, “Go and do likewise.” Which many have done to this day.

When John’s disciples returned and told John what they had seen, he answered, “We will have to wait for another.” And then he wept bitterly.