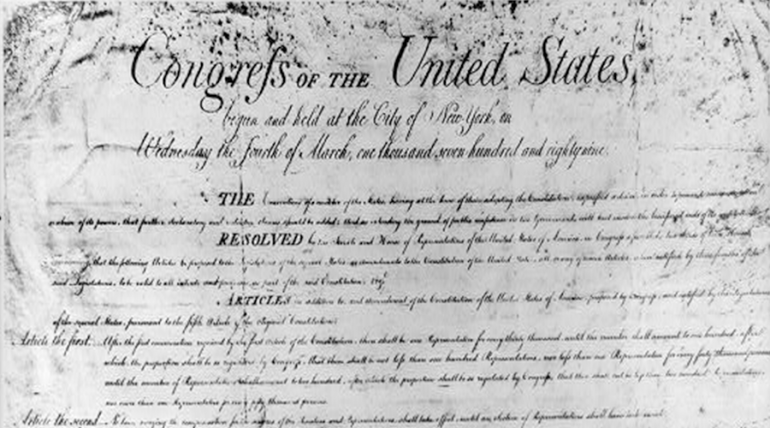 Congress shall make no law respecting an establishment of religion, or prohibiting the free exercise thereof; or abridging the freedom of speech, or of the press; or the right of the people peaceably to assemble, and to petition the government for a redress of grievances.

No one traveling to or within the United States should ever have to fear being isolated, detained, maligned, persecuted or prosecuted because of their religion. No elected official, soldier, officer of the law or court, and certainly anyone who has sworn to protect the Constitution, should be allowed to keep their job if they violate our core and founding principles of freedom of religion.

The detaining of U.S. citizens who are Muslim simply because they are Muslim is an issue worthy of protest and outrage. As a violation of their individual rights, such behavior is unjust, illegal, and stands as a threat to the rights of every citizen. It should cause all of us to contact our elected officials in concern for what is happening, voicing strong opposition to rhetoric and policies the would cause customs, law enforcement, immigration, and other employees of our government to even think that such behavior is intended or acceptable.

Freedom of Speech, or of the press: Enemies of the People

In the First Amendment the Freedom of the Press is a guaranteed right along with the Freedom of Religion. Note there are no qualifications about whether it is “fake news”,”real news”, factual or biased.

Actually, the whole point of such a right was to make sure that the Press could be biased, in that it could and, perhaps even, should question, critique, analyze and challenge our leaders, government, and society. The Constitution and the Bill of Rights were written and ratified by those who had used the Press both to challenge the British government and Crown (as anyone familiar with Benjamin Franklin knows: sometimes this occurred with great sarcasm and, er, creativity) and to advocate for a new system of government based upon the Constitution (the Federalist Papers, for example, were published as a series in newspapers making a biased case for both the Constitution and the Republic).  Far from seeing the press as the enemy of the people, the framers of the Constitution and those ratifying the Bill of Rights made sure to protect this great, often irritating and provocative, non-governmental power vital to real democracy.

The Right of the People Peaceably To Assemble: Real Town Hall Meetings

Just a quick thought: those gathering at town halls to voice their thoughts like citizens rather than sit an be talked to like a passive audience are to be commended. We need more of this.

Petition the government for a redress of grievances: Make Contact

If you are reading this post and have thoughts (whatever direction) about your government, please contact your representatives in Congress and your local elected officials.  According to what I’ve been told, by phone is better than by email. Tell them what you think. Do this peaceably and civilly, but directly and concisely.  Tell them the kind of government “for and by the People” that you want.  If you are in Oklahoma, you can find your elected officials’ information here.

Muhammad Ali Jr., 44, and his mother, Khalilah Camacho-Ali, the first wife of Muhammad Ali, were arriving at Fort Lauderdale-Hollywood International Airport on Feb. 7 after returning from speaking at a Black History Month event in Montego Bay, Jamaica. They were pulled aside while going through customs because of their Arabic-sounding names, according to family friend and lawyer Chris Mancini.

Immigration officials let Camacho-Ali go after she showed them a photo of herself with her ex-husband, but her son did not have such a photo and wasn’t as lucky. Mancini said officials held and questioned Ali Jr. for nearly two hours, repeatedly asking him, “Where did you get your name from?” and “Are you Muslim?”

When Ali Jr. responded that yes, he is a Muslim, the officers kept questioning him about his religion and where he was born. Ali Jr. was born in Philadelphia in 1972 and holds a U.S. passport.