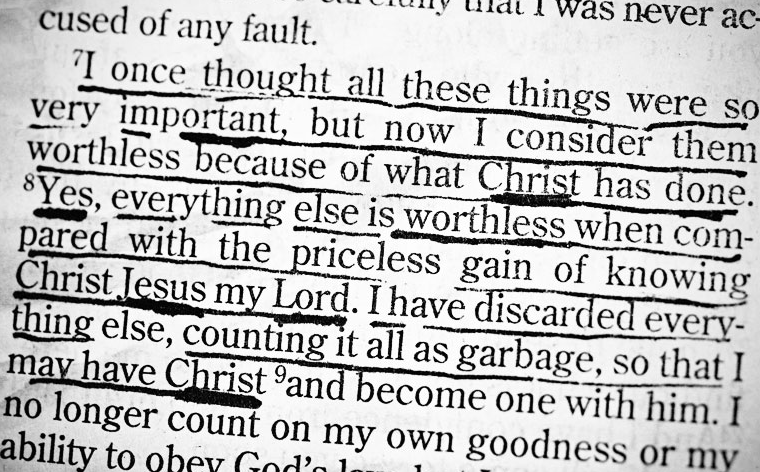 Something wonderful has been happening to me: I’m beginning to fail where I used to find success.

I first started noticing it a year or two ago. It started with realizing that I was having difficulty effectively leading discussions on things like the Bible, philosophy, theology, books, etc. Really, the thing I noticed is that people who expected me to be good at these things (and what shouldn’t they?), would subtly with their body language and eyes express some level of confusion, disengagement, boredom, or disappointment. I felt it as a sense of something just not “clicking” as I tried to lead, teach, or facilitate.

For years I’ve been able to consistently and effectively perform some activities: giving talks, leading discussions (particularly in house settings), teaching, inspiring. It was what I did. These were the activities that for most of my adult life for which I’ve been paid and for which what I was known for doing fairly well.  In this regard, I’ve been fortunate to have a career that allowed me to pursue my geeky interests in things theological, ancient, philosophical, and biblical, and then share with others the things I was learning and experiencing myself—and it would connect.

What’s interesting is that I’ve tried to share this sense of decline, this sort of feeling that I’m failing and fading, with some of my friends. Most of them, even those who I think really know that it is happening, get defensive for my sake.  They want to make me feel better:  “Hey, don’t say that. I think you’re doing a great job!”, or “Hey, don’t write yourself out of this thing. It sounds like you are down on yourself.”  I think they are worried that I’m entering into some sort of depression or something. They do know it’s happening though.  They are frequently the ones who say, “Jimmy, what do you think about…?” and then regret asking that question when I give a less than effective, connected, or meaningful response. They are having to learn to live with this new reality in their friend, as well.  Some have cued in and have quit asking for my input, probably wishing that others would figure this out as well.

But the thing is: I think this is supposed to be happening. I believe it’s something God is doing in me to re-create me for the sake of the Kingdom, and I feel to do this God has to strip away and tear down a lot in me. This deconstruction doesn’t simply include the bad, it also includes the areas that God has gifted and used me previously. It even includes good things. Sometimes that has to happen, I think, to make room for the new.

So I am welcoming it. Although I must say that this recognition of “I used to be good at [insert whatever it is], but I really keep bombing at it now” isn’t easy.  It’s awkward and scary. When identity is so wrapped up in what one does, such deconstructions and re-creations go all the way to the core of a person’s being. When you experience it, there’s a loss of foundation and bearing—both personally and socially.  Such a loss comes with all the emotions and anxieties that the movie Gravity brings up: blindness, lostness,  emptiness, aloneness, etc.

But it still feels right. I know deeply that this is something that the Holy Spirit is doing in me, and that I’m supposed to submit to it. It may sound strange, but I feel like I’m supposed to rejoice in my failing and embrace the obscurity that comes from doing less, and watching and listening more (things that are difficult for an opinionated talker). Truly, when the awkward, failing moments happen, I get this picture in my head that God is laughing. Not a mocking laugh, but a laugh that invites me to join in the humor of the whole process.  Like a parent watching their child learn how to do the new things, it’s a divine laugh of God’s love and joy for and in me.

“If anyone else thinks he has reason for confidence in the flesh, I have more: circumcised on the eighth day, of the people of Israel, of the tribe of Benjamin, a Hebrew of Hebrews; as to the law, a Pharisee; as to zeal, a persecutor of the church; as to righteousness under the law, blameless. But whatever gain I had, I counted as loss for the sake of Christ. Indeed, I count everything as loss because of the surpassing worth of knowing Christ Jesus my Lord.

For his sake I have suffered the loss of all things and count them as rubbish, in order that I may gain Christ and be found in him, not having a righteousness of my own that comes from the law, but that which comes through faith in Christ, the righteousness from God that depends on faith— that I may know him and the power of his resurrection, and may share his sufferings, becoming like him in his death, that by any means possible I may attain the resurrection from the dead.

Not that I have already obtained this or am already perfect, but I press on to make it my own, because Christ Jesus has made me his own. Brothers, I do not consider that I have made it my own. But one thing I do: forgetting what lies behind and straining forward to what lies ahead, I press on toward the goal for the prize of the upward call of God in Christ Jesus.”

“So to keep me from becoming conceited because of the surpassing greatness of the revelations, a thorn was given me in the flesh, a messenger of Satan to harass me, to keep me from becoming conceited. Three times I pleaded with the Lord about this, that it should leave me. But he said to me, “My grace is sufficient for you, for my power is made perfect in weakness.” Therefore I will boast all the more gladly of my weaknesses, so that the power of Christ may rest upon me. For the sake of Christ, then, I am content with weaknesses, insults, hardships, persecutions, and calamities. For when I am weak, then I am strong.”