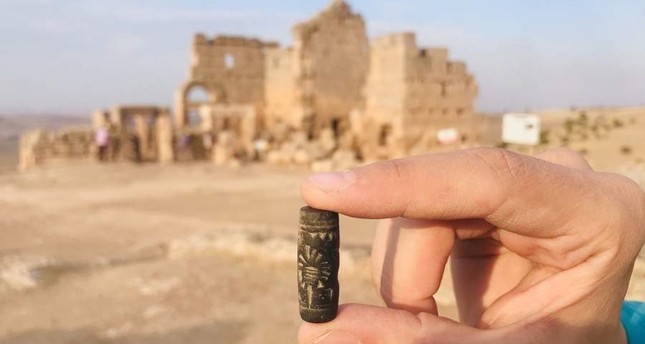 ‘Archaeologists discovered a 3,000- stamp believed to belong to the Assyrians during excavations carried out at the Zerzevan Castle in southeastern Turkey’s Diyarbakır province.

The stamp was found near the underground sanctuary located within the castle compound, which contains remnants of the city wall — which is 12-15 meters high and 1,200 meters long —including observation and defense towers, a church, an administration building, cereal and ammunition storehouses, an underground sanctuary, rock tombs, water canals and a cistern.

…[Aytaç ] Coşkun [the excavation director] said that the chlorite stamp, which has a clay imprint, is the only example of its kind due to the unique figures engraved on it.

“ a deity figure on it. There is a tree of life in front of the behind it is a bird. The deity figure on the stamp gives life to of life with the cones and holy water in the bucket. There is a sacred meaning to the fact that the sun’s rays and the head of the to the sky. Therefore, this seal is important,” Çoşkun explained.’

Read more from the articles here and here.