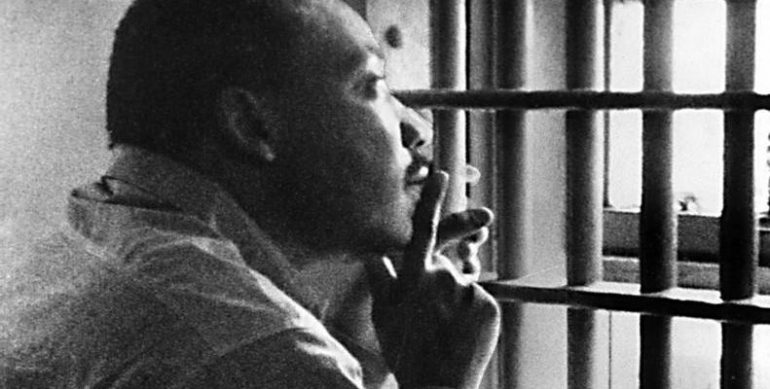 Below are excerpts from MLK’s “Letter From Birmingham Jail”, written and developed in response to an open letter issued by eight white clergymen who were opposed to the Birmingham civil rights demonstrations in Spring of 1963.

In their letter these clergymen were critical of the non-violent actions engaged by King and other “outsiders” and accused demonstrators of actually inciting violence and hatred, rather than moving towards “resolution of our local problems” (mentioned previously as the “racial issues in our area”).  King’s response, initially hand-written in the margins of the newspaper in which the open letter appeared and while King was jailed for his participation in the demonstrations, was issued and then went through a series of revisions prior to its first publication in The Atlantic.

I encourage you to read all of  “Letter From Birmingham Jail”  (or listen to a recording of King reading the letter here).  The entire letter is relevant for the American church then and now.  Here are two passages where King gives his reasons for being in Birmingham and his thoughts/struggles/hopes concerning the Church:

“My Dear Fellow Clergymen . . . I am in Birmingham because injustice is here. Just as the prophets of the eighth century B.C. left their villages and carried their ‘thus saith the Lord’ far beyond the boundaries of their home towns, and just as the Apostle Paul left his village of Tarsus and carried the gospel of Jesus Christ to the far corners of the Greco Roman world, so am I compelled to carry the gospel of freedom beyond my own home town. Like Paul, I must constantly respond to the Macedonian call for aid.

Moreover, I am cognizant of the interrelatedness of all communities and states. I cannot sit idly by in Atlanta and not be concerned about what happens in Birmingham. Injustice anywhere is a threat to justice everywhere. We are caught in an inescapable network of mutuality, tied in a single garment of destiny. Whatever affects one directly, affects all indirectly. Never again can we afford to live with the narrow, provincial ‘outside agitator’ idea. Anyone who lives inside the United States can never be considered an outsider anywhere within its bounds.

You deplore the demonstrations taking place in Birmingham. But your statement, I am sorry to say, fails to express a similar concern for the conditions that brought about the demonstrations. I am sure that none of you would want to rest content with the superficial kind of social analysis that deals merely with effects and does not grapple with underlying causes. It is unfortunate that demonstrations are taking place in Birmingham, but it is even more unfortunate that the city’s white power structure left the Negro community with no alternative.”

Later in his letter, King addresses the American church and the challenge of sacrificial non-conformity to injustice more directly:

“. . . In deep disappointment I have wept over the laxity of the church. But be assured that my tears have been tears of love. There can be no deep disappointment where there is not deep love. Yes, I love the church. How could I do otherwise? I am in the rather unique position of being the son, the grandson and the great grandson of preachers. Yes, I see the church as the body of Christ. But, oh! How we have blemished and scarred that body through social neglect and through fear of being nonconformists.

There was a time when the church was very powerful–in the time when the early Christians rejoiced at being deemed worthy to suffer for what they believed. In those days the church was not merely a thermometer that recorded the ideas and principles of popular opinion; it was a thermostat that transformed the mores of society. Whenever the early Christians entered a town, the people in power became disturbed and immediately sought to convict the Christians for being ‘disturbers of the peace’ and ‘outside agitators.’ But the Christians pressed on, in the conviction that they were ‘a colony of heaven,’ called to obey God rather than man. Small in number, they were big in commitment. They were too God-intoxicated to be ‘astronomically intimidated.’ By their effort and example they brought an end to such ancient evils as infanticide and gladiatorial contests. Things are different now. So often the contemporary church is a weak, ineffectual voice with an uncertain sound. So often it is an archdefender of the status quo. Far from being disturbed by the presence of the church, the power structure of the average community is consoled by the church’s silent–and often even vocal–sanction of things as they are.

But the judgment of God is upon the church as never before. If today’s church does not recapture the sacrificial spirit of the early church, it will lose its authenticity, forfeit the loyalty of millions, and be dismissed as an irrelevant social club with no meaning for the twentieth century. Every day I meet young people whose disappointment with the church has turned into outright disgust.

Perhaps I have once again been too optimistic. Is organized religion too inextricably bound to the status quo to save our nation and the world? Perhaps I must turn my faith to the inner spiritual church, the church within the church, as the true ekklesia and the hope of the world. But again I am thankful to God that some noble souls from the ranks of organized religion have broken loose from the paralyzing chains of conformity and joined us as active partners in the struggle for freedom. They have left their secure congregations and walked the streets of Albany, Georgia, with us. They have gone down the highways of the South on tortuous rides for freedom. Yes, they have gone to jail with us. Some have been dismissed from their churches, have lost the support of their bishops and fellow ministers. But they have acted in the faith that right defeated is stronger than evil triumphant. Their witness has been the spiritual salt that has preserved the true meaning of the gospel in these troubled times. They have carved a tunnel of hope through the dark mountain of disappointment. I hope the church as a whole will meet the challenge of this decisive hour. But even if the church does not come to the aid of justice, I have no despair about the future. I have no fear about the outcome of our struggle in Birmingham, even if our motives are at present misunderstood. We will reach the goal of freedom in Birmingham and all over the nation, because the goal of America is freedom. Abused and scorned though we may be, our destiny is tied up with America’s destiny. Before the pilgrims landed at Plymouth, we were here. Before the pen of Jefferson etched the majestic words of the Declaration of Independence across the pages of history, we were here. For more than two centuries our forebears labored in this country without wages; they made cotton king; they built the homes of their masters while suffering gross injustice and shameful humiliation -and yet out of a bottomless vitality they continued to thrive and develop. If the inexpressible cruelties of slavery could not stop us, the opposition we now face will surely fail. We will win our freedom because the sacred heritage of our nation and the eternal will of God are embodied in our echoing demands.”