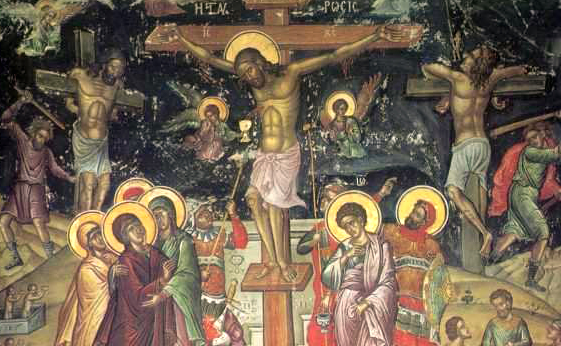 And Jesus cried out again with a loud voice and yielded up his spirit.

And behold, the curtain of the temple was torn in two, from top to bottom. And the earth shook, and the rocks were split. The tombs also were opened.  And many bodies of the saints who had fallen asleep were raised,and coming out of the tombs after his resurrection they went into the holy city and appeared to many. When the centurion and those who were with him, keeping watch over Jesus, saw the earthquake and what took place, they were filled with awe and said, “Truly this was the Son of God!”

And Jesus uttered a loud cry and breathed his last. And the curtain of the temple was torn in two, from top to bottom. And when the centurion, who stood facing him, saw that in this way he breathed his last, he said, “Truly this man was the Son of God!”

There were also women looking on from a distance, among whom were Mary Magdalene, and Mary the mother of James the younger and of Joses, and Salome.

And the curtain of the temple was torn in two.Then Jesus, calling out with a loud voice, said, “Father, into your hands I commit my spirit!” And having said this he breathed his last.Now when the centurion saw what had taken place, he praised God, saying, “Certainly this man was innocent!” And all the crowds that had assembled for this spectacle, when they saw what had taken place, returned home beating their breasts. And all his acquaintances and the women who had followed him from Galilee stood at a distance watching these things.

After this, Jesus, knowing that all was now finished, said (to fulfill the Scripture), “I thirst.”A jar full of sour wine stood there, so they put a sponge full of the sour wine on a hyssop branch and held it to his mouth.When Jesus had received the sour wine, he said, “It is finished,” and he bowed his head and gave up his spirit.

Since it was the day of Preparation, and so that the bodies would not remain on the cross on the Sabbath (for that Sabbath was a high day), the Jews asked Pilate that their legs might be broken and that they might be taken away. So the soldiers came and broke the legs of the first, and of the other who had been crucified with him.But when they came to Jesus and saw that he was already dead, they did not break his legs. But one of the soldiers pierced his side with a spear, and at once there came out blood and water.He who saw it has borne witness—his testimony is true, and he knows that he is telling the truth—that you also may believe. For these things took place that the Scripture might be fulfilled: “Not one of his bones will be broken.” And again another Scripture says, “They will look on him whom they have pierced.”