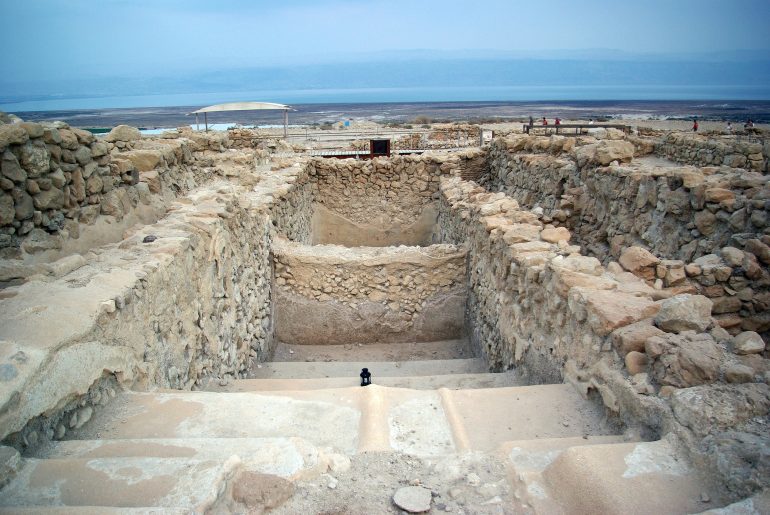 HaAretz premium has an article on a theory, based on the Damascus Document, that Qumran was primarily a festival location and not a permanent dwelling for the Essene (or other) sect.

‘“If you were an Essene you were obliged to come once a year to this meeting in order to renew your covenant with God. In order to convene thousands of people you need infrastructure, which is why you have the largest ritual pool in the country, with a large empty plaza. I claim that this plaza is the key,” says the study’s author, Dr. Daniel Vainstub, an archaeologist and philologist from Ben Gurion University and the Israel Museum.

The Damascus Document includes the rules for this yearly event, he maintains.

During a visit to Qumran, Vainstub explains how he interprets the site based on the text of the Damascus Document and the Community Rule document, a manuscript that describes the customs and way of life of the Yahad community, which most researchers associate with the Essenes. For Vainstub, the plaza at the southern part of the site, devoid of buildings, is the main feature. That is where the men of this community gathered once a year, during the Shavuot festival. The Essenes were a Jewish sect but did not recognize the temple in Jerusalem or the priestly families of Jerusalem, or the Hebrew calendar, thereby exempting themselves from the pilgrimage to Jerusalem. Instead, they went to the desert.’

The article, entitled “New Study Solves the Mystery of Dead Sea Scrolls Site,” is in HaAretz Premium and will be behind a paywall soon.