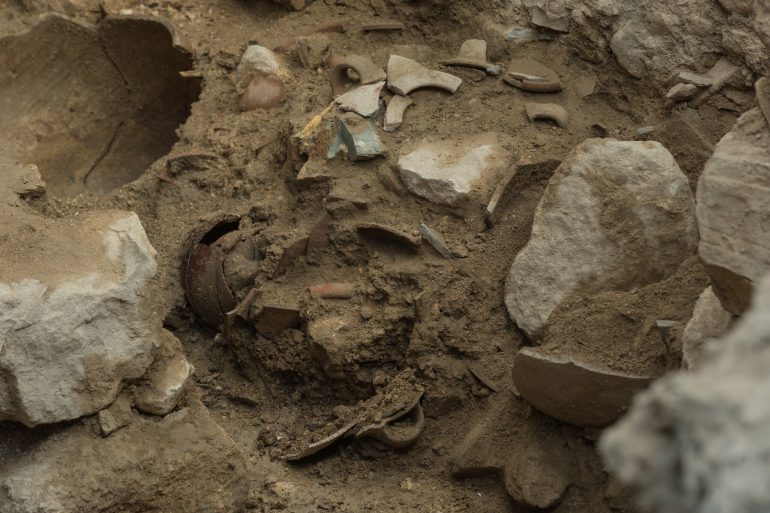 (Photo Credit: Eliyahu Yanai/ City of David. From The Times of Israel caption: “Remains of tools discovered in Jerusalem’s City of David within a layer of destruction from the 8th century BCE, which coincided with a massive earthquake mentioned in the Bible. The tools were likely shattered during the quake.”)

Read the full article in The Times of Israel. Here is a section containing quotes from Aren M. Maeir of Bar-Ilan University on the dating of the find:

‘According to Bar-Ilan University Prof. Aren M. Maeir, the director of the Tell es-Safi/Gath Archaeological Project, the proof of earthquake is “based on specific ways that walls collapse — in our case evidence of the ‘waves’ of energy that hit after an earthquake.”

Maeir was able to date the earthquake layer based on the levels below, including the securely dated Hazael destruction of 830 BCE. Above the ample signs of battle and conquest was “a period of abandonment with windblown sediments, then the earthquake, and then above it, two levels dating to the late 8th cent BCE.”’

This may be the earthquake that is described in Amos 1:1 and Zechariah 14:5:

‘The words of Amos, who was among the shepherds of Tekoa, which he saw concerning Israel in the days of Uzziah king of Judah and in the days of Jeroboam the son of Joash, king of Israel, two years before the earthquake.’ (Amos 1:1 ESV)