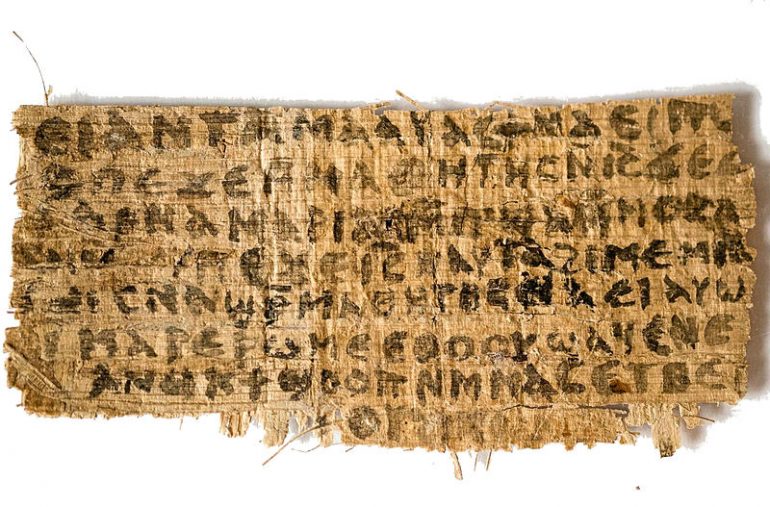 You may be seeing headlines today on various news sources about the “Jesus Wife” manuscript. While students of ancient Christian texts from the early to Medieval period will find this fascinating, most of the headlines are sensationalistic. It’s important to note that this Coptic manuscript looks to be from the 8th century and has very little potential to have any connection to the historical Jesus.

NT and early Christianity scholar Larry Hurtado does a great job in his initial thoughts of summarizing the information. In his post Dr. Hurtado states:

Certainly, as Prof. King has rather consistently emphasized all along, whatever the date and provenance of the item, it has absolutely no significance whatsoever for “historical Jesus” studies. Contrary to some of the sensationalized news stories, that is, the fragment has no import for the question of whether Jesus was married.

Instead, she continues to propose that the fragment may reflect tensions and questions about marriage, celibacy, child-bearing, and gender that emerged in early Christianity in the early centuries (indeed, to judge from NT texts such as 1 Tim. 4:1-5; and even 1 Cor 7:1-7, questions of this nature emerged quite early). But, to repeat a point, the revised date for the papyrus (mid-8th century CE) introduces other factors to consider as well.

EDIT:  Dr. Hurtado has added a follow-up post, in which he is a little more emphatic about some issues (especially the sensationalism in the media).  He states:

. . . let me reiterate that all references to “The Gospel of Jesus’ Wife” are completely misleading tripe.  What we have is a purported small fragment with several incomplete lines on each side, in which one line contains the words “my wife” ascribed to Jesus there.  If the fragment is authentic (i.e., from some Christian hand ca. 7th-10th century CE, as per the Harvard radio-carbon test), only God knows what it was.  But it’s totally mischievous to claim that it comes from some “Gospel of Jesus’ Wife”.  We have a “Jesus’ Wife fragment.”  That’s it.  [emphasis added]