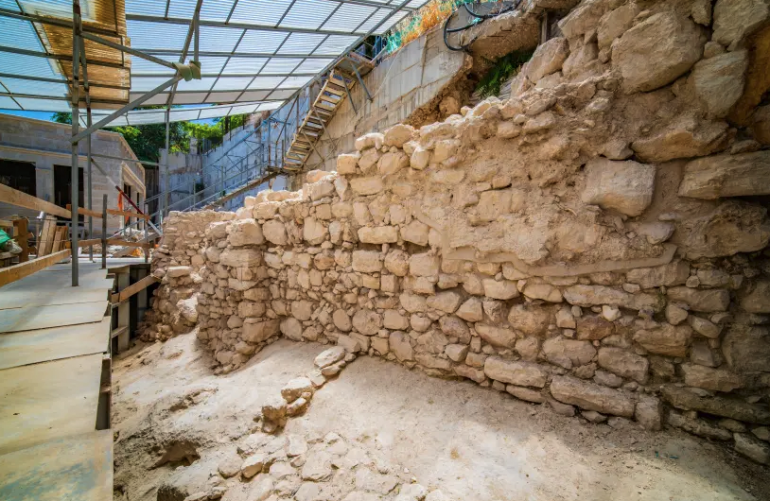 (photo credit: KOBI HARATI/CITY OF DAVID, from The Jerusalem Post)

The Jerusalem Post and other outlets are carrying this news. The announcement comes on on the eve of the Ninth of Av, a day marking terrible calamities in Jewish history (the fall to the Babylonians in 587/586 BCE, the destruction of the Temple in 70 CE, and several others), and this news release may have been timed due to the discovery’s connection with the first destruction of Jerusalem on that date.

There is still analysis and dating to be done. I’m sure there will be debates on it among scholars. The article notes not only the discovery of the wall but also several artifacts and houses behind the wall.

While the newly uncovered section still has to be dated independently (“We are working on getting some radiocarbon dating,” Vukosavović noted), the other two sections were built around the 8th century BCE, in a period also known as the First Temple Period.Behind the remains of the wall, the ruins of some houses are still visible.“In one, we found ashes that we believe date back to the Babylonian invasion,” said Vukosavović.

From: “Archaeologists find part of Jerusalem’s wall destroyed ahead of 9th of Av In 586 BCE, the Babylonians breached into the city and tore down the Temple, but a part of the wall survived.” Jerusalem Post By ROSSELLA TERCATIN   JULY 14, 2021 16:18