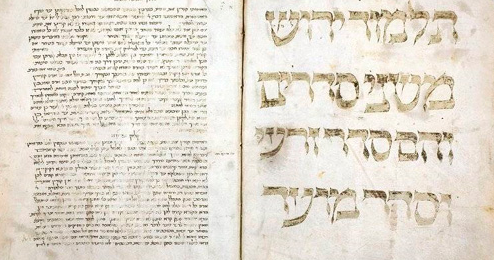 Given all the hubbub about eclipses (lunar and solar) lately, and how such events  are interpreted as having potential prophetic or symbolic meanings for Israel and the world, I thought I would do a quick search of what Jewish extra-biblical sources say about celestial eclipses.  Here are the results:

The Talmud is a collection of Jewish legal decisions and stories compiled from a number of sources and completed in the 5th century.  Its foundational material is the Mishnah, the written collection of Jewish law from the second century, with further elaborations, clarifications, and modifications to those laws as they were decided and discussed over time.

Surprisingly, the Talmud only had one section dealing with this topic, located in Sukkah 2:9:

L. You have no nation in the whole world which is smitten, the god of which is not smitten right along with it, M. “as it is said, And against all the gods of Egypt I will execute judgments” (Exo. 12:12).

N. When Israel do the will of the Omnipresent, they do not have to worry about all these omens, O. as it is said, “Thus says the Lord, Do not learn the way of the gentiles, nor be dismayed at the signs of the heavens, for the nations are dismayed at them” (Jer. 10:2) [T. Suk. 2:6E-R]. P. So idolators will be dismayed, but Israelites should not be dismayed.

III.4 A. Our rabbis have taught on Tannaite authority:
B. For four reasons is the sun eclipsed:

C. Because a head of a court has died and has not been properly mourned,
D. because a betrothed girl has cried out in a town and none goes to her assistance,
E. because of pederasty,
F. and because of two brothers whose blood is spilled simultaneously.

G. [In Tosefta’s version] And because of four reasons are the lights of heaven eclipsed:

H. because of counterfeiters, perjurers, people who raise small cattle in the land of Israel and people who cut down good trees.
I. And because of four sorts of bad deeds in the property of Israelite householders handed over to the government:
J. because of holding on to writs of indebtedness which have already been paid,
K. because of lending on interest,
L. [29B] because of pledging funds to charity but not paying up, and
M. because of having the power to protest and not protesting [wrong-doing] [T. Suk. 2:5].

Philo wrote in first century. Heavily influenced by Greek philosophy, his writings reflect an attempt to bring together biblical texts, Jewish traditions, and philosophical ideas that were popular during his time, often using allegorical interpretations of scripture to do so.

“And they have been created, as Moses tells us, not only that they might send light upon the earth, but also that they might display signs of future events. For either by their risings, or their settings, or their eclipses, or again by their appearances and occultations, or by the other variations observable in their motions, men oftentimes conjecture what is about to happen, the productiveness or unproductiveness of the crops, the birth or loss of their cattle, fine weather or cloudy weather, calm and violent storms of wind, floods in the rivers or droughts, a tranquil state of the sea and heavy waves, unusual changes in the seasons of the year when either the summer is cold like winter, or the winter warm, or when the spring assumes the temperature of autumn or the autumn that of spring. And before now some men have conjecturally predicted disturbances and commotions of the earth from the revolutions of the heavenly bodies, and innumerable other events which have turned out most exactly true: so that it is a most veracious saying that “the stars were created to act as signs, and moreover to mark the seasons.” And by the word seasons the divisions of the year are here intended. And why may not this be reasonably affirmed? For what other idea of opportunity can there be except that it is the time for success? And the seasons bring everything to perfection and set everything right; giving perfection to the sowing and planting of fruits, and to the birth and growth of animals.”

Philo sees such events as the Providential aspect of nature at work (they are from divinely ordered natural causes):

“…and the principle which causes the rainbow is also the same which, in some degree, regulates eclipses. For eclipses are a natural consequence of the rules which regulate the divine natures of the sun and moon; and they are indications either of the impending death of some king, or of the destruction of some city, as Pindar also has told us in enigmatical terms, alluding to such events as the consequences of the omens which I have now been mentioning.

And the circle of the Milky Way partakes of the same natural essences with the other stars; but merely the fact that it is hard to account for, is no reason that those who are accustomed to investigate the principles of nature should shrink from examining into it; for the discovery of those things is most beneficial, and the investigation of them is intrinsically most delightful for its own sake, to those who are fond of learning.

For as the sun and moon exist in consequence of Providence, so also do all things in heaven, even though we are unable to trace out accurately the respective natures and powers of each, and are, therefore, reduced to silence about them; and earthquakes, and pestilences, and the fall of thunderbolts, and things of that kind, are said indeed to be sent by God, but, in reality, they are not so, for God is absolutely not the cause of any evil whatever of any kind, but the natural changes of the elements produce these effects, not as circumstances which guide nature, but as those which are followed by necessary results, and which do themselves follow naturally upon their antecedent causes.”

Philo also addresses attempts to make predictions by such celestial events (it’s not a new thing):

“But all those persons who pursue the spurious and pretended kind of prophecy are inverting the order of truth by conjectures and guesses, perverting sincerity, and easily influencing those who are of unstable dispositions, as a violent wind, when blowing in a contrary direction, tosses about and overturns vessels without ballast, preventing them from anchoring in the safe havens of truth. For such persons think proper to say whatever they conjecture, not as if they were things which they themselves had found out, but as if they were divine oracles revealed to themselves alone, for the more complete inducement of great and numerous crowds to believe a deceit.

Such persons our lawgiver very appropriately calls false prophets, who adulterate the true prophecy, and overshadow what is genuine by their spurious devices; but in a very short time all their maneuvers are detected, since nature does not choose to be always hidden, but, when a suitable opportunity offers, displays her own power with irresistible strength. For as in the case of eclipses of the sun the rays which have, for a brief moment, been obscured, a short time afterwards shine forth again, exhibiting an unclouded and far-seen brilliancy without anything whatever coming over the sun at all, but one unalloyed blaze beaming forth from him in a serene sky; so also, even though some persons may deliver predictions, practicing a lying art of prophecy, and disguising themselves under the specious name of prophetic inspiration, falsely taking the name of God in vain, they will be easily convicted. For, again, the truth will come forth and will beam forth, shedding around a most conspicuous light, so that the falsehood which has previously overshadowed it will disappear.”

Josephus was a Jewish historian, writing for a Roman audience.  He recounts a story concerning Herod and the popular understanding of one particular solar eclipse during his reign.

“(17.6.4) The occasion was this:—This Matthias the high priest, on the night before that day when the fast was to be celebrated, seemed, in a dream, to have conversation with his wife; and because he could not officiate himself on that account, Joseph, the son of Ellemus, his kinsman, assisted him in that sacred office. (17.6.4) But Herod deprived this Matthias of the high priesthood, and burnt the other Matthias, who had raised the sedition, with his companions, alive. And that very night there was an eclipse of the moon.

(17.6.5) But now Herod’s distemper greatly increased upon him after a severe manner, and this by God’s judgment upon him for his sins: for a fire glowed in him slowly, which did not so much appear to the touch outwardly as it augmented his pains inwardly; (17.6.5) for it brought upon him a vehement appetite to eating, which he could not avoid to supply with one sort of food or other. His entrails were also exulcerated, and the chief violence of his pain lay on his colon; an aqueous and transparent liquor also settled itself about his feet, and a like matter afflicted him at the bottom of his belly. Nay, farther, his privy member was putrified, and produced worms; and when he sat upright he had a difficulty of breathing, which was very loathsome, on account of the stench of his breath, and the quickness of its returns; he had also convulsions in all parts of his body, which increased his strength to an insufferable degree.

It was said by those who pretended to divine, and who were endowed with wisdom to foretell such things, that God inflicted this punishment on the king on account of his great impiety.”

Surprisingly, I found no direct references to lunar or solar eclipses in the collection of texts from Qumran, the Dead Sea Scrolls.  There may be inferences (symbolic or metaphorical) that I missed doing a simple search.  There were also no mentions in the Mishnah.