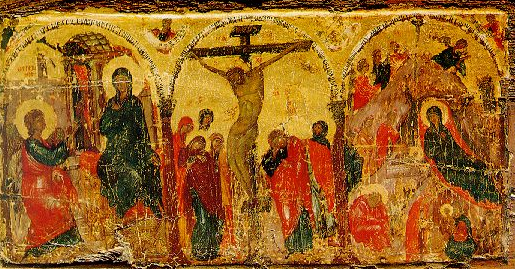 [originally posted April 2009, some edits have been made to update links.]

Since we are on the eve of Good Friday, I thought I might share some information on early depictions of Christ’s crucifixion.

For an excellent historical overview of crucifixion as a tool of public torture and execution, I highly recommend the article “Crucifixion in Antiquity:  The Anthropological Evidence” by Joe Zias [Zias’ article is no longer available online, but you can find some of the material in his original article and other information here] .  James Tabor also has a good summary of the first century historian Joesphus’ references to crucifixion.

It might be surprising to know that visual depictions of Jesus being crucified are very rare prior to the 4th century.  The earliest existing graphic depiction dates from the 3rd century and probably was not created by a Christian. It is a graffito seemingly created to mock the worship of a crucified God:

This image was carved in plaster and discovered on the Palatine Hill in Rome in 1857.  It’s inscription reads in Greek:  Αλεξαμενος Ï²εβετε θεον, “Alexamenos worships god!” or possibly “Alexamenos worships [a] god.”  It seems very likely that this inscription was made to mock Alexamenos’ worship of Jesus.  Though it has been dated by some as early as the 1st century C.E., the most common dating is to the 3rd century C.E.  The 3rd century corresponds to Tertullian’s defense against the accusations that Christians were worshipping the head of an ass:  “Somniatis caput asininum esse Deum nostrum“. (Apology, xvi ; Ad Nationes, I, xi)

“For, like some others, you are under the delusion that our god is an ass’s head. Cornelius Tacitus first put this notion into people’s minds. In the fifth book of his histories, beginning the (narrative of the) Jewish war with an account of the origin of the nation; and theorizing at his pleasure about the origin, as well as the name and the religion of the Jews, he states that having been delivered, or rather, in his opinion, expelled from Egypt, in crossing the vast plains of Arabia, where water is so scanty, they were in extremity from thirst; but taking the guidance of the wild asses, which it was thought might be seeking water after feeding, they discovered a fountain, and thereupon in their gratitude they consecrated a head of this species of animal. And as Christianity is nearly allied to Judaism, from this, I suppose, it was taken for granted that we too are devoted to the worship of the same image . . . But lately a new edition of our god has been given to the world in that great city: it originated with a certain vile man who was wont to hire himself out to cheat the wild beasts, and who exhibited a picture with this inscription: The God of the Christians, born of an ass.”

It might be surprising to know that there is an amazing lack of (existing) early images of Jesus’ crucifixion made by Christians. Perhaps the earliest Christian depiction of Jesus’ crucifixion can be found on the door of the Basilica of Saint Sabina in Rome.  This door was most likely carved around the mid 5th century and contains many panels of biblical scenes.  The crucifixion image is very unique as it seems to depict a crucifixion on a type of gallows before city walls:

What Type of Cross Was Used?

The image from Saint Sabina brings up the question of the type of cross that was used to crucify Jesus.  The Romans were known to use multiple forms of crucifixion, with different materials and positions of the crucified.  Simple stakes or gibbets (crux simplex), trees, gallows, and walls may have been used in addition to stakes/trees with cross-beams.

Often the crucified may have been tied to the cross rather than nailed.  The most common type of cross with a cross-beam was probably the Tau cross which was in the shape of that Greek letter (Τ), and this may have been the type of cross used to crucify Jesus rather than crux immissa which is the most well known Christian image of the cross today.  The late 1st century Christian document the Epistle of Barnabas make the following symbolic interpretation concerning Abraham in regards to the shape of Jesus’ cross:

‘For it says: “And Abraham circumcised ten and eight and three hundred men of his household.” What, then, is the knowledge that was given to him? Observe that it mentions the “ten and eight” first, and then after an interval the “three hundred.” As for the “ten and eight,” the Ι [the first letter of Jesus’ name in Greek, IHSOUS] being ten and the H [eta, the second letter of Jesus’ name] being eight; thus you have “Jesus.” [IHSOUS].* And because the cross, which is shaped like the T [tau in Greek most commonly looks like a captial “T”, without the extended line above the cross-bar], was destined to convey grace, it mentions also the “three hundred.” So he reveals Jesus in the two letters, and the cross in the other one.’  —Epstle of Barnabas 9:7

(*The abbreviation IH was sometimes used as short-hand for Jesus in early Christian literature.)

However, Barnabas is a late first century document and may be more interested in the rhetoric of his apologetic based on Greek letters than the actual form used to crucify Jesus.  It is possible that any of the three types of crosses could have been used, or even crosses in the shapes of X or Y.  Interestingly, it is known that the Romans crucified victims on trees turned into gibbets, and the book of Acts along with Paul refers to Jesus as hanging on a “tree” (Acts 5:30, 10:39, 13:29; Gal 3:13).  However, the Greek word for “tree”, ξύλου, can also simply mean wood, and the author of Acts could be simply speaking of the stake or pole. There is some thinking among historians that perhaps the Romans found old olive trees readily useful and available for the task:

In terms of depictions of Jesus’ crucifixion in movies, I’ve always thought the Last Temptation of Christ (despite its other historical and theological issues) was one of the better representations  in film of the form of crucifixion (except for the single nail for the feet).  In it, Jesus is stripped naked and crucified on a cross-beam tied to rough hewn post, creating the “T” of the Tau form, and the thieves are crucified on trees.