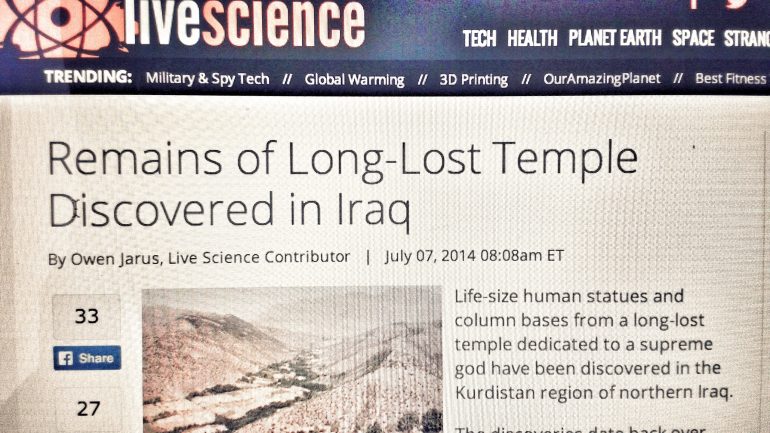 According to reports in LiveScience, new archeological discoveries related to the Urartians, Scythians, and Assyrians are being made in the northern ares of Iraq (in Kurdistan).  This comes in the midst of the political and social conflicts in the region:

Marf Zamua said there are risks associated with living and working in the border area. Due to the conflicts of the past few decades, there are numerous unexploded land mines, one of which killed a young shepherd a month back, he said. Additionally the National Iraqi News Agency reports that Iranian artillery recently fired onto the Iraqi side of the border, and there have been past instances where planes from Turkey have launched attacks into Iraqi Kurdistan.

Despite the risks there are also terrific archaeological finds to be made. In addition to the statues and column bases, Marf Zamuafound a bronze statuette of a wild goat about 3.3 inches (8.4 centimeters) long and 3.2 inches (8.3 cm) tall. Researchers are now trying to decipher a cuneiform inscription on the statuette.

Zamua presented these findings at the International Congress on the Archaeology of the Ancient Near East, held at the University of Basel in Switzerland, and the reports sound as though it is just the beginning:

This long-lost temple is just the tip of the archaeological iceberg During his work in Kurdistan, Marf Zamua also found several life-size human statues that are up to 7.5 feet (2.3 meters) tall. Made of limestone, basalt or sandstone, some of these statues are now partly broken.

The Assyrians had conflict with the northern kingdom of Israel in the 9th-8th centuries B.C.E., before finally conquering Israel late in the 8th century. According to the Hebrew scriptures, the Assyrians also threatened Judah after Israel had been conquered.  Once Israel had been conquered, Assyria ruled the newly acquired area from the fortress of Megiddo (and the new Assyrian province was named after it). 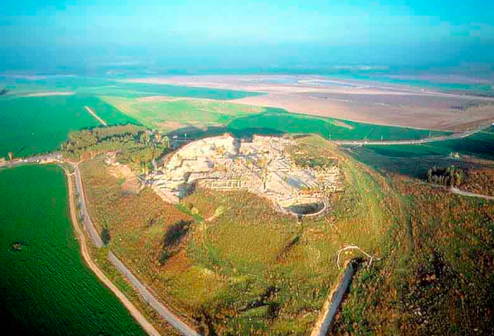 The Assyrians were known and feared for their brutality (something not unique to them among Ancient Near Eastern kingdoms) and often impaled the peoples of those who opposed them.  The book of Jonah records the story of YHWH offering forgiveness to the Assyrians if they would repent, and Jonah’s unwillingness to offer YHWH’s mercy to such people.  The image below is a depiction of Jehu, king of Israel, submitting to Shalmaneser III of Assyria (858-824 BCE. Image from oracc.museum.upenn.edu):

Panel A2 of the Black Obelisk (British Museum, ME 118885) showing Jehu king of Israel, who is designated as mIa-ú-a DUMU mHu-um-ri ‘Jehu descendant of Omri’, submitting to Shalmaneser III of Assyria (858-824 BC). Photo by Ben James. (Source: http://oracc.museum.upenn.edu)