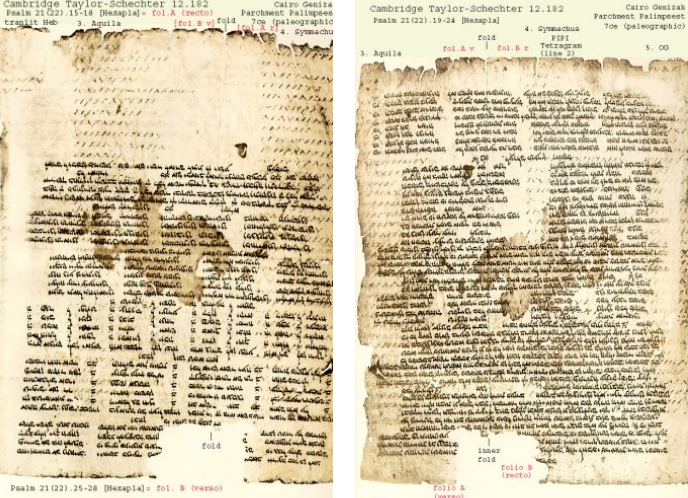 I encourage everyone interested in biblical manuscripts and transmission of the biblical texts, to read this informative Cambridge library article about manuscript Taylor-Schechter 12.182 (T-S 12.182), the oldest known fragment of Origen’s Hexapla. It contains very good information and great explanatory illustrations.

The article explains in more detail, but the Hexapla was an incredible work in scope, completed in the mid 200s CE, in which Origen documented in (at least) six columns versions of the Hebrew scripture in parallel columns:

This work took Origen at least 28 years to complete. According to tradition, the original and earliest volumes of it were stored in the library at Caesarea Maritima, where Origen completed his work. If there were copies there, they were likely lost when the library was also destroyed in the mid 7th century CE.

T-S12.182 is a palimpsest fragment of the Hexapla that dates from the 5th or 6th century CE, and, as noted, it is the earliest fragment or that work that has been found. It was found in Egypt in the late 19th century, and first published in 1900.

A palimpsest is a manuscript in which earlier text or texts was/were removed (usually by scraping and washing) and a later text was overwritten on the cleaned writing material. In the case of T-S12.182, the top existing text is from a reading cycle in Hebrew used for Jewish worship and the Hexapla is faintly underneath (links to full images here and here):

Note that in the above images, the manuscript is upside down regarding the Hebrew, but right side up in relation to the Greek undertext, which is most visible at the top of the left image. The Cambridge Library article provides a good illustration show the Greek text discovered under the Hebrew.

An Example of a Mistake in Writing the Divine Name

As an additional side note, not mentioned in the Cambridge article, the representation of the Divine Name יהוה (YHWH) in the Koine Greek of T-S12.182 is , ΠΙΠΙ, “PIPI”, which according to Jerome occurred in some Greek manuscripts and resulted in people mistakenly mispronouncing the Divine Name. This error was probably because in some Greek manuscripts the Divine Name, out of reverence for the Name, was written in Hebrew rather than Greek letters (an example of this is found in papyrus Fouad 266). Later scribes and readers, unaware of this, mistakenly re-copied it or pronounced it as if it were written in Greek letters. The occurrence of ΠΙΠΙ in T-S12.182 may be an example of this type of mistake.

The image below is not of T-S12.182, but of Papyrus Fouad 226, a pre-Christian Greek manuscript containing the Divine Name in Hebrew:

Below is an image of יהוה (YHWH) in the Isaiah Scroll from cave 1 at Qumran. It is easy to to see how, from a handwritten manuscript, someone could see the Hebrew for YHWH as the Greek ΠΙΠΙ.