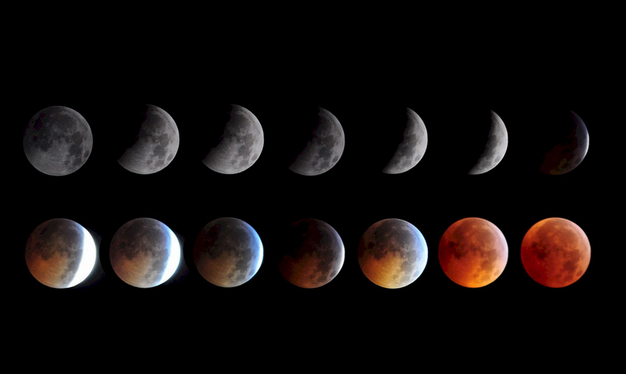 In light of tonight’s celestial event, I thought it would be good list the passages in scripture that refer to the “moon turning to blood.”  There are three such passages, with one being a duplicate:  Peter’s quote of Joel on the Day of Pentecost (the Jewish holiday of Shavuot, or “Weeks”).  The other is from the book of Revelation.  While there are other biblical passages that describe signs and events in the heavens (the most well known being the star signifying Jesus’ birth), these are the only three that mention what has popularly been called “blood moons”.

Note that the “moon to blood” also includes other celestial events, such as the sun being darkened (all three) and stars falling to the earth (Revelation only).  Additionally, Peter seems to be saying that this prophecy from Joel was being fulfilled at Pentecost.  I quote each of them at length for context:

Joel and the Day of the YHWH

“Fear not, you beasts of the field,
for the pastures of the wilderness are green;
the tree bears its fruit;
the fig tree and vine give their full yield.

“Be glad, O children of Zion,
and rejoice in the LORD your God,
for he has given the early rain for your vindication;
he has poured down for you abundant rain,
the early and the latter rain, as before.

“The threshing floors shall be full of grain;
the vats shall overflow with wine and oil.
I will restore to you the years
that the swarming locust has eaten,
the hopper, the destroyer, and the cutter,
my great army, which I sent among you.

“And I will show wonders in the heavens and on the earth, blood and fire and columns of smoke. The sun shall be turned to darkness, and the moon to blood, before the great and awesome day of the LORD comes. And it shall come to pass that everyone who calls on the name of the LORD shall be saved. For in Mount Zion and in Jerusalem there shall be those who escape, as the LORD has said, and among the survivors shall be those whom the LORD calls.

“For behold, in those days and at that time, when I restore the fortunes of Judah and Jerusalem, I will gather all the nations and bring them down to the Valley of Jehoshaphat. And I will enter into judgment with them there, on behalf of my people and my heritage Israel, because they have scattered them among the nations and have divided up my land, and have cast lots for my people, and have traded a boy for a prostitute, and have sold a girl for wine and have drunk it.” (Joel 2.22–3.3 ESV)

“But Peter, standing with the eleven, lifted up his voice and addressed them: “Men of Judea and all who dwell in Jerusalem, let this be known to you, and give ear to my words. For these people are not drunk, as you suppose, since it is only the third hour of the day. But this is what was uttered through the prophet Joel:

“‘And in the last days it shall be, God declares,
that I will pour out my Spirit on all flesh,
and your sons and your daughters shall prophesy,
and your young men shall see visions,
and your old men shall dream dreams;
even on my male servants and female servants
in those days I will pour out my Spirit, and they shall prophesy.
And I will show wonders in the heavens above
and signs on the earth below,
blood, and fire, and vapor of smoke;
the sun shall be turned to darkness
and the moon to blood,
before the day of the Lord comes, the great and magnificent day.
And it shall come to pass that everyone who calls upon the name of the Lord shall be saved.’” (Acts 2.14–21 ESV emphasis added)

The Revelation Given to John

“When he opened the sixth seal, I looked, and behold, there was a great earthquake, and the sun became black as sackcloth, the full moon became like blood, and the stars of the sky fell to the earth as the fig tree sheds its winter fruit when shaken by a gale. The sky vanished like a scroll that is being rolled up, and every mountain and island was removed from its place. Then the kings of the earth and the great ones and the generals and the rich and the powerful, and everyone, slave and free, hid themselves in the caves and among the rocks of the mountains, calling to the mountains and rocks, “Fall on us and hide us from the face of him who is seated on the throne, and from the wrath of the Lamb, for the great day of their wrath has come, and who can stand?”

After this I saw four angels standing at the four corners of the earth, holding back the four winds of the earth, that no wind might blow on earth or sea or against any tree. Then I saw another angel ascending from the rising of the sun, with the seal of the living God, and he called with a loud voice to the four angels who had been given power to harm earth and sea, saying, “Do not harm the earth or the sea or the trees, until we have sealed the servants of our God on their foreheads.”” (Revelation 6.12–7.3 ESV)