Okay, so I have a lot of pet peeves.

One of them is when someone makes expert-like claims about this or that in the Bible as it’s related to Hebrew or Greek when it is obvious they have no knowledge of either language.

So today I’m responding to an article a friend shared on Facebook (I know, I know: people with pet peeves should never even get close to Facebook). The article was titled “Cain’s Wife—Who Was She?” and is apparently part 6 of a series by Ken Ham, a fairly well-known Christian apologist (you know, the one who debated Bill Nye). This article (though written in 2007) is apparently headlining the Answers in Genesis (Ham’s apologetics organization) homepage today.

There are many critiques and questions one could post about this article. I mean, one could very reasonably ask: Is this even really a question or article that we want to spend time talking about?

However, I do want to point out one specific portion of the article (you know, because it’s one of those things that bothers me).

For Ham the question of “Where did Cain get his wife?” is often presented as a challenge to the belief that human existence started with one man and one woman, Adam and Eve:

Ham then gives some preliminary background information concerning Adam, Eve, and Cain before he makes his case that using Bible “we can say for certain” that Cain’s wife was his sister or niece (which, honestly, can simply be assumed from the narrative).

Towards the end of the article under the header “The Wife”, Ham makes a claim concerning the Hebrew of Genesis 4.  He clarifies for his readers that now he is working “totally from Scripture, without any personal prejudices or other extra-biblical ideas”.  Note: Such a claim should already be a red flag to the reader.  Then he states:

“A closer look at the Hebrew word for ‘wife’ in Genesis reveals something readers may miss in translation. It was more obvious to those speaking Hebrew that Cain’s wife was likely his sister.”

He goes on to clarify:

The word ishshah is the [Hebrew] word for ‘woman,’ and it means ‘from man.’ It is a derivation of the Hebrew words ‘iysh (pronounced: eesh) and enowsh, which both mean ‘man.’ This can be seen in Genesis 2:23 where the name ‘woman’ (ishshah) is given to one who came from Adam.

‘And Adam said: “This is now bone of my bones and flesh of my flesh; She shall be called Woman [ishshah], because she was taken out of Man [iysh]” (Genesis 2:23).’

Thus, Cain’s wife is a descendant of Adam/man. Therefore, she had to be his [Cain’s] sister (or possibly niece). Hebrew readers should be able to make this connection easier; however, much is lost when translated.

To summarize Ham’s argument: the Hebrew word ’ishah (אשה) is specifically tied to the creation of “woman” from “man”. Therefore, according to Ham, since ’Cain’s wife in Genesis 4 is also referred to as ’ishah, it is clear to any Hebrew reader that Cain’s wife must be an offspring of Adam. Thus Cain’s wife had to have been his sister (or possibly his niece). Again, this seems to be a logical assumption of the story, but Ham wants to make it a special case that depends upon what he sees as a clear and unique Hebrew word in this passage: ’ishah.

What is glaringly obvious from this article, no matter what the final opinion about the origin/identity of Cain’s wife, is that either Ken Ham knows very little about Hebrew (biblical or otherwise) or he is playing upon his audience’s lack of knowledge.

The article is correct that this word is used in Genesis 2 with the creation of the woman (’ishah/אשה). It is also true that ’ishah  is used for  both “wife” and “woman”; however, both of these usages are true throughout the Hebrew Bible and not only in these two passages.  This usage continues in modern Hebrew. It’s the same way I would refer to my wife today (ha-’ishah sheli). It is not, as Ken Ham argues, somehow used in a unique manner in this passage from Genesis 4 as a reference back to a direct paternal or creational relationship with Adam.

’Ishah is so common in the Hebrew language that I find it extremely difficult to believe anyone who knows the language on even a basic level (certainly anyone who reads the Hebrew scriptures even somewhat regularly) would not know this.  He also neglects to mention that -ah is the most common form of marking the feminine singular in Hebrew, e.g., ’ish=man, ‘ishah=woman; sûs=horse, sûsah=mare;  melek=king, malkah=queen; etc.  My guess is that Ham, like many, uses the Strong’s Concordance to look up words and thinks this equates to knowledge of Hebrew.

’Ishah Refers to Animals As Well As People

In addition, where Ham really gets it wrong is that, though he mentions it in his article, he seems oblivious that the the word can simply mean “female” and, far contrary to his claim that ’ishah in Genesis 4 should be an obvious clue in Hebrew to paternal connection with Adam, it is also used to refer to animals.

For example, just a few chapters later in Genesis, we find this:

The word translated “mate” in this passage is exactly the same form as its usage in Genesis 4 for Cain’s wife: ’ishtō (אִשְׁתּ֑וֹ), or “his wife”. Certainly there is not  a genetic connection with Adam and with the female “mates” (literally “wives”/”women”) of the male animals on the ark.  However, if we were to accept Ham’s argument, then we would have to assume that the female animals in Genesis 7 (since they are ’ishah as well) are also descendants of Adam.

Again, Ken Ham is either playing on people’s ignorance of Hebrew and/or exposing his own (or both), all the while portraying himself as someone who knows what he is talking about. Faking knowledge to the equally uninformed is an easy and common practice. My guess is that, without using software or a side-by-side translation with the English, Ham would have no idea how to read this (which is easy Hebrew):

It would be great to test him.

After posting a version of the above critique on my friend’s Facebook page, he responded: 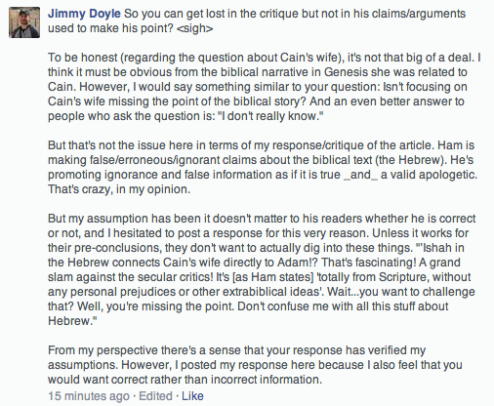 Helpful and/or Recommended Resources for this Post and for Ken Ham: