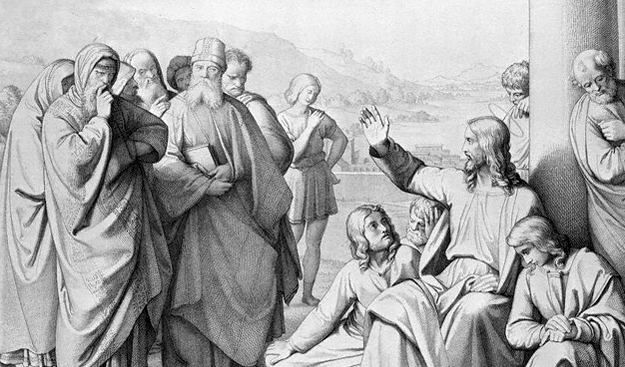 ‘Woe to you Pharisees, because you give God a tithe of your mint, rue and all other kinds of garden herbs, but you neglect justice for the poor and the love of God. You should have practiced the latter without leaving the former undone.

‘Woe to you Pharisees, because you’re so full of yourselves! You love the most important seats in the synagogues and greetings in the marketplaces.

‘Woe to you, because you are like unmarked graves, which men walk over by accident., making themselves unclean without even knowing it just by coming into contact with you.’

One of the experts in the law answered him, ‘Teacher, don’t you know that when you say these things, you insult us also.’

Jesus replied, ‘And you experts in the law, woe to you, because you load people down with burdens they can hardly carry–burdens of your rules and interpretations of the law, and you yourselves will not lift one finger to help them. Woe to you, because you build tombs for the prophets, and it was your forefathers who killed them. So you testify that you approve of what your forefathers did; they killed the prophets, and you build their tombs. Because of this, God in his wisdom said, “I will send them prophets and apostles, some of whom they will kill and others they will persecute.” Therefore this generation will be held responsible for the blood of all the prophets that has been shed since the beginning of the world, from the blood of Abel to the blood of Zechariah, who was killed between the altar and the sanctuary. Yes, I tell you, this generation will be held responsible for it all.

‘Woe to you experts in the law, because you have taken away the key to knowledge. You yourselves have not entered, and you have hindered those who were entering by claiming you hold the key.’

When Jesus left there, the Pharisees and the teachers of the law began to oppose him fiercely and to besiege him with questions, waiting to catch him in something he might say.

Nicodemus and Joseph of Arimathea were deeply troubled by this. “Doesn’t Jesus know how influential he is?  Why does he have to be so negative?  What if everyone went around talking like this?” they said. They decided to tell the other disciples how upset they were that Jesus would talk in such generalities. “Look,” Nicodemus said plainly, “I’m a Pharisee. I know that a lot of people look down on us already.  All these negative stereotypes! I think all Jesus has done is make us look even worse. He’s made us a laughing stock! We’re not all like that. It’s an horrible and accusatory over-generalization on his part.”

“Exactly,” replied Joseph, “I felt very uncomfortable. My friends were giving me those smart-looking smiles while he was talking, like, ‘he’s talking about you’. I felt like everyone was looking at me that way. But I’ve done a lot for those in poverty, both on a personal level and in terms of our city. I think the real issue is that Jesus doesn’t understand what it means to be a Pharisee and a leader of the people these days. I mean, I provided the funding for several of the prophets’ tombs. Should we not teach people to honor those great men and martyrs? Should I not set an example by providing a tomb for such godly men?”

Nicodemus chimed in:  “What am I supposed to do as a leader of the people? Should we not have parks and memorials? Should we not attend meetings with influential people? How else will God’s plans be accomplished? I think he’s really gone too far. I think Jesus will find he needs some of the people he has offended.  Some key leaders could prove to be crucial for his mission. What has he really done for the people anyway, you know, on a large scale?”

Joseph followed: “Agreed! Does it seem like all Jesus does is point out the problems with the people who are really trying to simply do what’s right, teach faithfulness to the scriptures, and follow God? Why doesn’t he rail against those people who are screwing around, drinking all the time, making themselves and the whole nation unclean?” Then he paused and thought quietly for a moment.  He let out a sigh and said, “I understand what he’s what he’s trying to say.  I just think he’s wrong to lump us all together like that. I’m not like what he said.”

John said, “You guys are making too big of a thing out of this.”

“No we’re not!” retorted Nicodemus. Then he looked at John and gave him a sharp smile. “You know he was talking about you, too, don’t you? Your whole family with priestly heritage is full of the kinds of people Jesus is criticizing. Doesn’t that bother you?”

“So, go talk to Jesus about it.” Peter said with a chuckle.

But Joseph and Nicodemus didn’t say anything to Jesus. They thought in their hearts, “He wouldn’t understand. ”