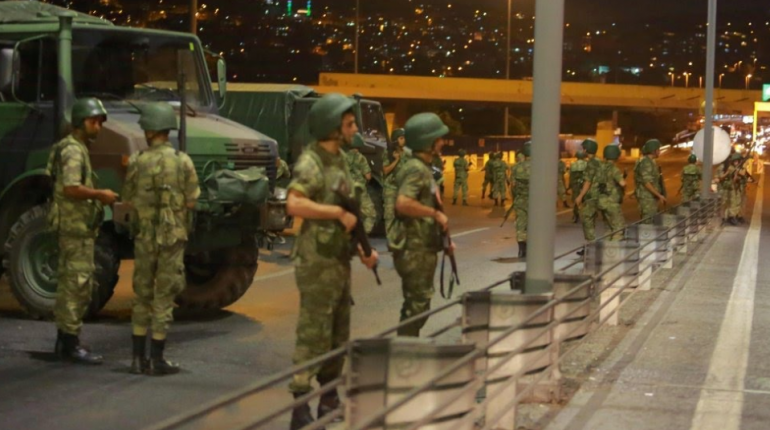 I had a good conversation with a new friend last night who is from Turkey. He explained to me a bit of the situation there. He is deeply concerned for the country and for his family who still live in Turkey.

The Move To Further Dictatorship

The situation seems pretty dire. Erdogan has fully revealed himself as a dictator, and (from my friend’s perspective) he has aligned himself with extremist elements and the jihadists—both allowing them to cross freely into Turkey and to engage in attacks for the purposes of allowing himself more autocratic power due to fear. My new friend fully believes that, though there have been rumblings of coups, this latest coup was manufactured by Erdogan as a way to both clean house and incite religious extremist elements against the more moderate and secular elements in society. The Turkish military leadership strongly represents this latter group. At this point over 9000 Turkish generals and officers have been arrested, and many thousands of soldiers. Erdogan has also used the coup as an opportunity to eradicate and remove elements opposed to him in areas such as education, revoking the teaching privileges of many teachers and professors.
Erdogan seems to be attempting to make himself Khalifa of Turkey. According to my friend that is what many are calling him, and Erdogan accepts the title. I asked if Erdogan wants to rule over areas beyond Turkey (a sort of renewed Ottoman Empire), and he said that he didn’t think so, but that he definitely desired dictatorial, unquestioned, and complete control of Turkey itself. I asked if Erdogan was religious. My friend said, “He used to be. But not anymore. For example, he used to say the daily prayers, but he does not. But he uses religion to gain support and power.”

The Verge of Castastrophe

From my friend’s perspective, Turkey is on the verge of something potentially looking like Syria. I asked him if he thought this was going to happen, and he said that areas in the south (along the Syrian border) and to the east (in the Kurdish areas), are already comparable, in his words, to “the Syrian war…there are towns and villages destroyed”. The question in this is what role or actions the people of Turkey will take, or are capable of taking.

In the conversation he was visibly emotional, and I asked him about his concern for his family (parents, siblings, etc). I asked, “So, what is it like for your family? Is it the kind of thing where they are worried about the police knocking on the door, coming to get them?” He said, “No. The concern is other civilians. The extremists. They are capturing people, soldiers and others. Beating them, killing them. In large groups.” He then showed me a couple of videos of such things, that I didn’t really want to see, but it was clearly important to him that he share this story.

I asked him what he would want me to let other friends of mine, other Americans know about this. What can we do? He said simply, “Pray. Let them know what I am telling you.”
1 Reply
Share This