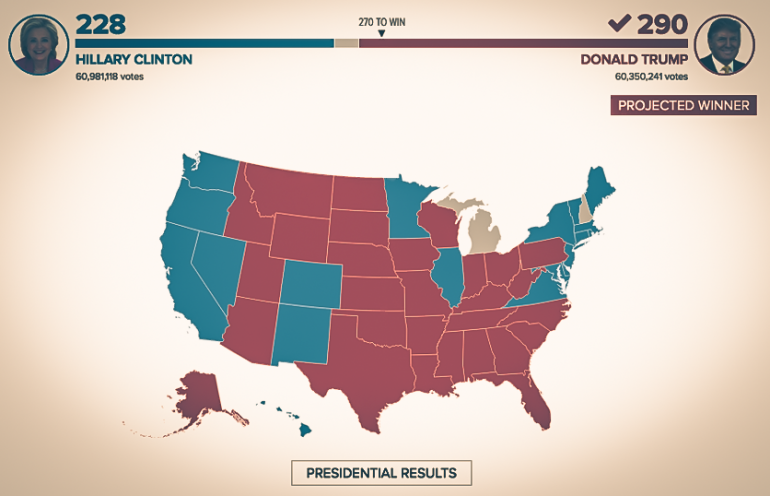 The electoral college is not better or worse than a pure majority election. It is simply a different form of democracy. Both forms (popular vote or electoral college) have pros and cons. Our system is a Republic, set up on state-based representation (were are the “United States”). Our Founders were more than aware of the different aspects and implications of different types of democracy, and they debated heavily and heatedly about it. Ultimately, the Federalists won the debate, and the result was the system that we have in our Constitution. Though it isn’t without tension, it has worked remarkably well. It both limits the tyranny of the masses and control by individual states (or, really, urban areas or heavily populated states vs. less populated). Personally, I do not believe that the adoption of a pure popular vote for President would resolve the tensions and division that our nation faces. There will always be those who feel disenfranchised, and it is likely better for that to be individuals rather than whole sections (states) within our nation. Also, I think what we have missed about the electoral system is that it really keeps a local action emphasis on all elections. If you don’t like the way your state went, you can actually get involved to try and shape those results in the future.

If you are a Democrat or Hillary supporter, and you think this election was rigged, please remember a few weeks ago your comments about Donald Trump and the corporate rolling of the eyes when asked if he would accept the result of this election and refused to answer. If you think the GOP has been hypocritical during this election campaign and that they “revealed their true colors”, please be aware that your own consistency, or lack of it, is on display at this moment. Both candidates had plenty of claims made against them. Both candidates have charges brought against them. Both have had it revealed that they’ve said and done stupid things. If you think James Comey cost Hillary the election, I don’t think you are paying attention. It will serve you better to move towards taking responsibility for a failure to connect with a large number of people (and it isn’t limited to the nation’s heartland and non-urban areas) rather than blaming. Both Trump and Bernie Sanders, from different sides, tapped into something real in our nation. We should all pay attention to it. It represents a broad desire for change in our government, even if the approaches are very different.

If you are a Republican or Trump supporter, particularly if you a Christian, please do not continue to passively and non-verbally turn a blind eye to the things your candidate has done or said that are hateful and divisive. You’ve won. You no longer have to worry about your candidate losing, or influencing a vote against him. Can you now begin to verbalize, actively, in conversations and social media those elements of Donald Trump’s campaign and personal actions that you do not support? Can you offer apology rather than an apologetic? Will you critique Trump, from a biblical, ethical, and moral basis, as much as you have other candidates, politicians, and parties? You’ve just elected a man that declared from the stage about hecklers: “Get them the f*** out of here!” A man who has repeatedly bragged, publicly and privately, about his sexual accomplishments, and offered little in regard as an apology. He said that he could, because of wealth and fame, kiss a woman and “grab her by the p****.” Can you now directly address these issues? This is your guy. You are, on some level, defined by him, and you are responsible for him being President of the United States. As a Christian the responsibility is on you to differentiate from and speak up about these issues. I think that responsibility has always been upon you, but it is certainly there now: you have nothing to lose. If you do not do this, you are revealing a very deep hypocrisy to a nation that is already skeptical of Christianity and the integrity of those who call themselves Christians. Many Christians who voted for Trump have been all too eager to make judgements based upon these types of behaviors when the political power or person they want is not the target (and let’s be honest, the level of judgement hasn’t been the same for Democrats as it has been of Republicans).

Please don’t kid yourselves: this affects how the message of Jesus is accepted by a world that needs the Gospel.

I think rioting and destruction of private property are not viable or effective forms of democratic protest. They are mob acts and criminal. They do not respect the rule of law, self-control, the true power and nature of free speech in the form of competition of the best ideas, nor do they display basic respect of persons who have different views. They do not further public dialogue, and, in the long run, they most often serve the purposes and message of whatever “other side” they are protesting. Honestly, in this regard, I see very little difference between the raging supporters of Donald Trump, both in terms of actions and hateful rhetoric, and the raging protestors of the election results. It all sounds much the same to me.