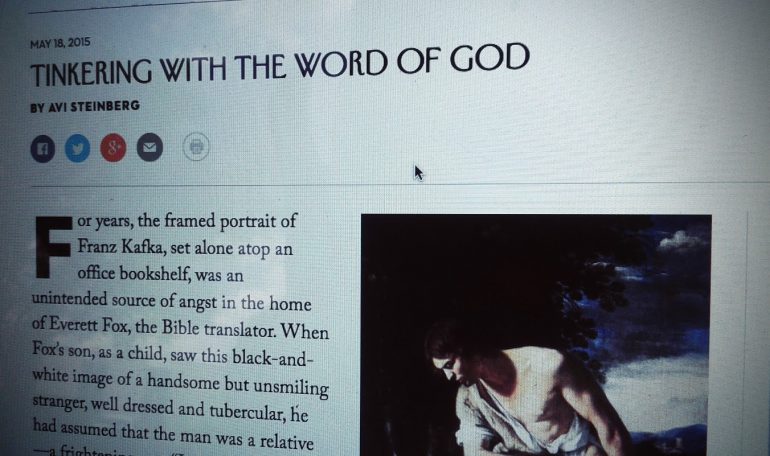 Really good article in the New Yorker about Everett Fox’s fantastic (in my opinion) translations of the Hebrew scriptures.  I have yet to read another translator who has so accurately captured the feel of the Hebrew text. While some have criticized the English of Fox’s work, I think (with others) that a text from a foreign language and culture should continue to feel foreign even in translation.  One of the aspects of meaning is the world of the source language.

Here are some excerpts:

“Fox has dedicated his life to giving the Anglophone ear a hint of that Hebrew drama. Many translators have tried, in one way or another, to make the Bible do in English what it does in Hebrew, but few have given top priority to the sound and feel of the original language. Fox uses every poetic means at his disposal: phrase length, line break, puns. He has paid particular attention to the word repetitions that the Biblical narrator uses to develop the story’s themes. He scrupulously preserves ancient Hebrew’s doubled verbs, which themselves sometimes double up (‘you will overtake, yes, overtake, and will rescue, yes, rescue’).”

“Orality is key to understanding the story, Fox believes, because the Bible, like many ancient texts, was designed to be sung and performed aloud.”

“…He also believes in his readers’ ability to cope with literalness, and makes a special effort to retain what he calls the ‘direct, earthy vocabulary’ of the Biblical text. If a sword has a mouth, Fox will let you know.”

It should come as no surprise that I highly endorse these works by Fox: