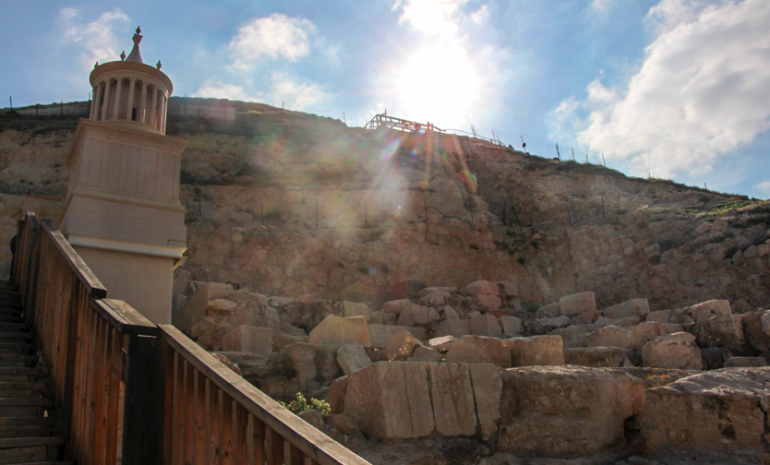 The news announced this week of the latest discoveries at the Herodium in the Holy Land are exciting.  According to the article:

Israeli archaeologists have uncovered a grand arched walkway built by Jewish Roman-era king Herod the Great at his Herodium palace that sheds more light on his formidable building projects.

After the palace-fort was completed, Herod appears to have changed his mind, and he ordered the entire mound, including the walkway, to be buried under rubble. It remained hidden until the debris was removed during the past year.

My daughter and I were at Herodiium little over a month ago, and during our visit areas were blocked off where archeologists were working.  However, we were excited to see most of the impressive site, including the area where Herod was likely buried. It will be great to be able to view the newly announced arched walkway in a year or so.

Herodium on the horizon  as viewed from Beit Jala (with Bethlehem in the foreground) | © 2015 jkdoyle.com

Herodium was built by Herod the Great, and, like many of his constructions, it served the dual purpose of both fortress and palace.  It had not only defensive elements, but also (another common feature of Herod’s architecture) an outdoor theatre. Even today the mountain fortress and its remains are impressive, and just east of Jerusalem the structure dominates the skyline.   Resembling a volcano, it is readily visible for miles around and seems to tower over the area.  Underneath the fortress there is a complex system of access tunnels and cisterns.

A Palace-Fortress with View

View of the surrounding regions from the top of Herodium, | © 2015 jkdoyle.com

Like many of Herod’s palace-fortresses, from the Herodium provides a means of viewing the surrounding areas.  From the top of the fortress, one can see from Jerusalem to the west down to the wilderness to the east leading to the Jordan valley. A fitting testament to a powerful and paranoid king.  In terms of a Christian perspective, there is quite a contrast between the king born in a cave Bethlehem and whose birth was announced in the shepherds fields of Bet Sahour, and the king who built the palace which overlooked (and was always visible from) those locations.

During the first Jewish revolt, Herodium was taken over by zealots and used to fight the Romans.  Large stones that were rolled down its sides as defense have been gathered at the site.  It also was used by the Byzantines, and even included a small church during that period.

The article concerning the new finds is great, and I highly encourage watching the video in the article (it may have an ad in Hebrew at the beginning). For more detailed information about Herod and the Herodium, this is a great documentary by the National Geographic Channel.